I work for IBM Corporation's Almaden Research Center from Vashon, WA. For contacting me email is best. I am working on file systems, lately improving filesets and snapshots in GPFS. I've been working on GPFS since 2005. Earlier I worked on the Distributed Storage Tank project and on Global Namespaces. I was a co-author on a paper in the IBM Systems Journal titled Global namespace for files. I am also interested in namespace work in Grid and NFSv4 protocols.

Previously I worked at the IBM Pittsburgh Lab, formerly known as Transarc Corporation. Much of the time at Transarc I was working on Episode, the DFS Server's file system. The Winter 1992 Usenix conference contained a fairly comprehensive description of Episode. I am also a co-author of an early paper on DFS, then called DEcorum. Here are some press releases announcing the formation of Transarc Corporation.

Before that I worked on AFS®, specifically the kaserver which implements the Kerberos 4 authentication protocol and an encyption algorithm called FCrypt. The goal of the FCrypt design was to provide a faster, smaller alternative to DES for use in the kernel. In retrospect this, was a mistake; amateur cryptographers should not design new ciphers for production systems. It is much harder to do a good job than it first appears. AFS is now available as open source and is supported by a vigorous development community. I occasionally contribute to the AFSLore Wiki, and I've become a pretty big fan of Wikis generally.

Before moving to Pittsburgh to work on AFS, I worked at Lawrence Livermore National Laboratory on the S-1 project. Mark Smotherman has put together an excellent history of the S-1 Supercomputer. Mark's page had many excellent references to documents from this project. Here are some others from that era:

(not) Weblog and PageRank

Adding content to the web is an important contribution that everyone can make to universal knowledge. More specifically, I want to return the favor that Google does me by being such a great search engine. In large part it does this using PageRank, which considers how frequently a page is a link target. But how will this work unless people create links to pages they like? Maintaining a weblog seems to be beyond me, so perhaps a simpler and more likely to succeed approach is a tagged and annotated bookmark system. I am using del.icio.us and hope to add a bookmark there with some tags and a sentence or two about every web page I like that I take the time to read. Here's a copy that will allow Google to index it (see del.icio.us's robots.txt; thanks to Boaz Shmueli for pointing this out). Also, here is my weblog, though I don't update it anymore.

It was brought to my attention, however, that the robots exclusion at del.icio.us is such that the bookmarks there do not contribute to the PageRank of the targets. Thus, my copy of my del.icio.us bookmarks will have to suffice for now.

I do believe that where there is a choice only between cowardice and violence, I would advise violence.

What we seek is not the overthrow of the government but a situation in which it gets lost in the shuffle.

Information is the oxygen of the modern age. It wafts across the electrified borders. Breezes of electronic beams blow through the Iron Curtain as if it were lace. 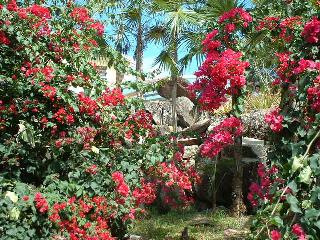 This is my PGP public key. Here are the particulars: